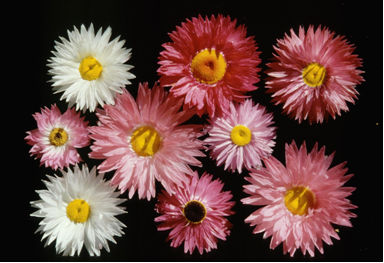 The impact of water deficit on plant growth, flowering and seed yield were examined in both glasshouse and field experiments. Adequate watering, particularly during early seedling growth, was essential for high yield. Water deficit modified the plant canopy by reducing stem number and branching which limited the sites for terminal inflorescence and seed production. The same proportion of stems produced inflorescences in well-watered and water-deficit plants and stem number contributed more to seed yield than any other component. Water deficit reduced seed weight of R. chlorocephala but only at the lowest level of irrigation (25% of A pan evaporation). Well-watered R. chlorocephala produced more seeds per plant than water-deficient plants. Differences in seed number were entirely due to differences in stem number. In contrast, water deficit reduced seed number per inflorescence and seed weight in S. filifolia. Severe water deficit inhibited branching in S. filifolia and this effect was more profound than in R. chlorocephala. Water deficit had no consequent effect on R. chlorocephala seed quality measured as seed germination. This contrasted with S. filifolia where water deficit reduced seed viability 6 months after harvest.

Germination of seeds of both R. chlorocephala and S. filifolia were poor at harvest. Seeds were stored for at a range of temperatures (5-65°C) for 10 months. Rhodanthe seeds lost dormancy within two months when stored at room temperature (25°C). They withstood storage temperatures up to 55°C and after ten months at this temperature, germination was still 90%. Yellow strawflower was 100% dormant at harvest and required a long period of dry storage (3 months at 25-40°C) to overcome dormancy. Heat (65-105°C for 12 h to 13 d) was further investigated as a means of overcoming dormancy. Seeds exposed to 80°C for 11 days germinated (88%). Seeds exposed to >80°C had reduced germinability due to reduced viability. The mechanisms of dormancy were further investigated. Seedcoats of S. filifolia were permeable to water and dormancy was imposed by the embryo. Exogenous gibberellic acid (30 µM GA3) alone, or in combination with KNO3 (10 mM), broke dormancy in intact seeds. Chlormequat and paclobutrazol, which interfere with gibberellin biosynthesis, reduced germination in seeds in which dormancy had been broken by either dry storage or heat. Applied GA3 reversed this inhibitory effect. Thus GA biosynthesis was required for the germination of dormant S. filifolia seeds. Dry storage or heat facilitated the transition of seeds from a dormant to a non-dormant stage by increasing the ability of seeds to synthesize endogenous gibberellins.