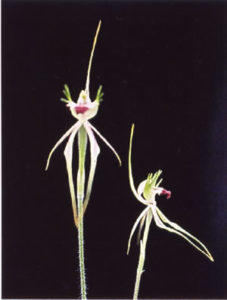 Many species of Australia’s rich terrestrial orchid flora are under threat, and active intervention is required to ensure their continued existence. The genus Caladenia, which includes the Spider Orchids, has a particularly large number of species that are threatened. Plantlets of Caladenia species produced through in vitro symbiotic germination for reintroduction into natural habitats, have less than 10 percent survival ex vitro, which may be due to altered anatomy, physiology and biochemistry caused by the in vitro environment. Photoautotrophic micropropagation with its raised carbon dioxide and light levels, has been found to increase growth rates for the epiphytic orchid, Cymbidium (Kozai et al., 1987) and for Eucalyptus camaldulensis, to increase both growth rates and plantlet survival ex vitro. In this study, the germination and growth of photoautotrophically micropropagated Caladenia tentaculata plantlets was compared with plantlets produced in the usual non photoautotrophic way.