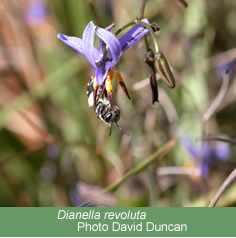 There is international concern that native plant pollination systems may be disrupted as a result of habitat loss and fragmentation processes. One important way that habitat fragmentation may endanger plant populations is by reducing the number of available mates (reducing plant density). Below critical density levels, sexual reproduction in a population can fail. Sustained reproductive failure could lead to population declines and ultimately extinctions of native plant species.

We used the Black-Anther Flax Lily (Dianella revoluta), a common understorey species, to look at how local mate density effects the deposition of outcross pollen (pollen from a mate, non-self pollen). We first established that the number of flowers that form fruit is greatest when outcross pollen is deposited on the stigma, and poor with only self-pollen. Yet the average pollinator visit in dense patches of mates results in twice as much self-pollen on the stigma as outcross pollen.

In experimental arrangements of manipulated flowers, we found that the deposition of outcross pollen declines significantly with distance from a pollen source. However, pollen load from other co-pollinated species did not decrease with distance, indicating that pollinator visitation to D. revoluta flowers was relatively constant irrespective of isolation from a potential mate. This demonstrates how fragmentation could detrimentally affect reproductive processes in even common species with adequate pollinator service.

In Australia we have little or no formal knowledge of important pollinating species for the vast majority of our flora. Therefore, we have no baseline with which to assess the ongoing health of our overall pollination service. This is of great concern and it is fundamentally important that we gather quality data on plant-pollinator relationships whenever the opportunities arise. Future research on the plant-pollinator interactions, and on effects of habitat fragmentation on the pollination ecology of natural systems, and the spatial scale of concern of these interactions is critically important to conservation and management.