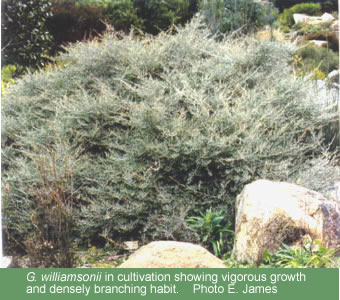 The cultivated population of G. williamsonii contains only 150 plants representing five genotypes.  Only seven genotypes remain in the wild and these populations are small and declining steadily.  This research is trying to determine why.

Microscopy has revealed that G. williamsonii flowers develop abnormally and are incapable of producing pollen. Any pollinated flowers must have received pollen from another source, most likely G. aquifolium which is very common and grows amongst G. williamsonii.

Allozyme analysis did not distinguish between between G. williamsonii and G. aquifolium but did indicate that individuals from the former were from a seedling population not vegetative clones. It is suggested that G. williamsonii may be a defective mutant arising by chance from G. aquifolium.

Since G. williamsonii does not appear to be a legitimate species, questions remain about the most appropriate management strategy.  Further research is required to unravel the biology of this endangered plant.