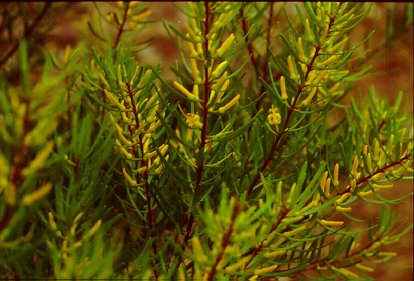 Lynda Bauer (ne Ketelhohn) and Margaret Johnston,
School of Land and Food, The University of Queensland

A study of the propagation, growth and development of Persoonia virgata was conducted to form a basis for the domestication of this species. P. virgata is an attractive, yellow-flowered shrub endemic to Australia. Stems are harvested commercially from naturally-occurring populations all year round, and sold on both the export and domestic flower markets. The cultivation of P. virgata as a floricultural crop is currently restricted by propagation difficulties.

Consistent results from the seed germination experiments showed that at least half removal of the endocarp from the P. virgata fruit is essential for germination. This was attributed to the endocarp restricting embryo expansion and development. The morphology of Persoonia fruit makes the endocarp removal process extremely difficult. The endocarp is extremely hard and 1 – 2 mm thick, and is surrounded by 6 – 8 mm of mesocarp. Nonetheless, it was shown that by first removing the mesocarp, and then using pliers of correct size (by a skilled operator), the endocarp could be cracked open and the seed released. The success of germination also relied upon minimising the microbial contamination of the seeds. This can be aided by removing the mesocarp using hydrochloric acid, and disinfesting the seed and the endocarp with a 2 hour soak in bleach before culturing aseptically.

Rooting success of P. virgata cuttings was highly dependent on the use of juvenile cutting material, which was supported by the success of rooting seedling explants and the complete failure of rooting mature explants in vitro. Cuttings from the different seedling genotypes showed a high variation in rooting success.

This study showed that the propagation of P. virgata, both sexually and asexually, is possible. Further research is required to make the propagation methods outlined more commercially viable.