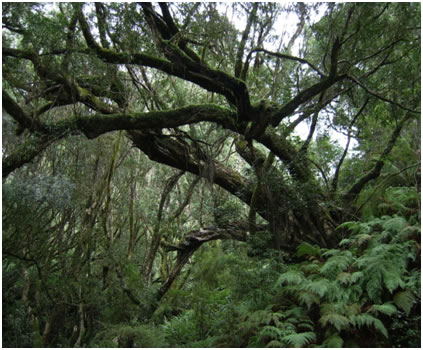 While Australian rainforests have been classified as fire intolerant, studies conducted in Australian environments over the past few years indicate that rainforest species, as a group, are able to regenerate following fires. These discrepancies—combined with past studies which identified several different environmental variables as the principal environmental controls for rainforest distribution—may be the result of the use of different definitions of rainforests, varying scales of investigation and the use of proxies for fire regimes.

Preliminary results indicate that, as a general rule, precipitation is the main environmental control for all rainforest types in the Sydney region at both scales. These results also indicate that varying vegetation types have different levels of sensitivity to the scale used in modelling. Scale differences can be observed for the secondary environmental controls of rainforest occurrence. Warm temperate rainforests and cool temperate rainforest models did not show different responses to scale and indicate that a combination of temperature and precipitation are most important for both rainforest types.

Temperate rainforest models are susceptible to scale differences: map-scale models identified time since fire as an influential variable while plot-scale models identified landscape position as more important following precipitation. Finally, the scale sensitivity of dry rainforests and subtropical rainforests could not be determined conclusively. Preliminary results indicate that these rainforest types may be controlled by fire regimes following precipitation. Additional analyses—currently in progress— will clarify this.