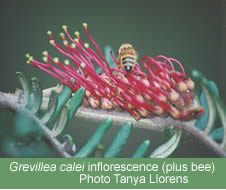 Grevillea caleyi is an endangered, fire-sensitive and self-compatible shrub that has been severely affected by recent habitat fragmentation. Small population size appears to have a negative impact on plant fecundity, plant survivorship, the mating system, and pollinator visitation in G. caleyi. These effects, as well as the random processes that occur in small populations, render small remnants of formerly more extensive G. caleyi populations vulnerable to genetic problems such as the loss of genetic diversity and increased inbreeding, which may in turn cause reduced population viability. However, G. caleyi possesses a long-lived soil-stored seed bank that, theoretically, might buffer some of these genetic changes by storing genetic diversity from previous generations. In this study, I investigated whether the seed bank of G. caleyi possesses genetic characteristics that may allow it to slow the rate of genetic changes in populations that have suffered various effects of habitat fragmentation.

I used seven microsatellite loci to genotype both the adult plants at three G. caleyi populations, and also the seedlings that emerged following fire. One population, DF, was of moderate size (several hundred plants), while two (RA and JJM) had very small pre-fire adult populations (5 and 14 adults) but over 100 post-fire seedlings. DF had no genetic diversity among the adults or seedlings, which were genetically identical for the markers I used, indicating historical isolation and/or the effects of past population bottlenecks. At the other two populations, post-fire seedlings had similar allele frequencies to pre-fire adults but greater genetic diversity, as indicated by the percent of loci that were polymorphic and the levels of heterozygosity. In addition, the seed bank contained 20% (RA) and 12.5% (JJM) more alleles than were found among the adults. Parentage analyses revealed that, for some seedlings, neither parent was found among the pre-fire adults.

These results indicate that the seed bank was highly effective at preserving both the genetic composition and frequencies of alleles present in pre-fire adults, despite the severe bottleneck that occurred in the pre-fire adult population. They also indicate the effectiveness of the seed bank in storing alleles and diversity that has been lost from, or not expressed in, the adult population, although these results may be partly due to some pre-fire adults having died prior to my sampling. The major mechanisms by which the seed bank has apparently buffered the loss of genetic diversity from these small populations is by increasing their effective population size to well above that of the adult plants, as well as the presence of multiple generations of seed in the seed bank, due to some seed remaining dormant following a fire.

Despite the above results, post-fire seedlings showed evidence of greater inbreeding than pre-fire adults at RA and JJM, and greater spatial genetic structure at JJM, indicating a possible effect of habitat fragmentation on the current genetics of these populations. When fresh seed collected from JJM were genotyped, they revealed higher estimates of inbreeding than seedlings and adults, large variation among plants in outcrossing rate and in male reproductive success, and showed that most outcrossing is between very near neighbours. In addition, parentage analyses of seedlings at JJM revealed that most seedlings were likely to have been the selfed progeny of a very small proportion of the pre-fire adults. These results suggest that genetic changes are occurring within these populations and are likely to continue occurring, particularly at JJM, where each subsequent adult generation is certain to be very small, due to the limited habitat patch size.

While the results of this study indicate that the seed bank of G. caleyi possesses properties that should enable populations to slow the rate of loss of genetic diversity and changes in allele frequencies following habitat fragmentation, they also suggest that the ability of the seed bank to buffer such changes is limited and short-term, and likely to be exhausted after several generations of continuing small population size and reduced pollinator visitation.