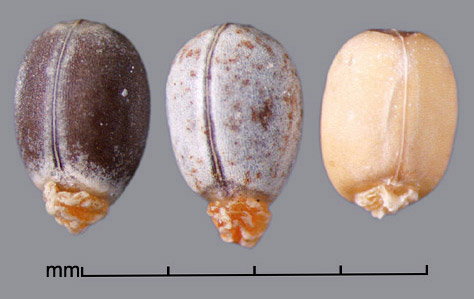 Within the Euphorbiaceae, many species have seeds that bear an appendage called a caruncle, although carunculate seeds have a sporadic taxonomic distribution, with some euphorb genera containing both carunculate and ecarunculate species (Webster 1994). The euphorb caruncle is often assumed to function as an elaiosome, that is, as an appendage that facilitates seed dispersal by ants, or myrmecochory. This assumption has received very little quantitative or experimental verification.

Our work on the euphorb Adriana concentrated on determining whether or not carunculate seeds are dispersed by ants and whether or not the caruncle is an attractant to seed-dispersing ants. Together, the field and laboratory choice trials indicated that the caruncle is attractive to ants and that carunculate seeds are particularly attractive to omnivorous ants of the genera Rhytidoponera and Iridomyrmex.
Since elaiosomes have been hypothesised to have evolved so as to resemble arthropods in their fatty acid composition, we compared the fatty acid compositions of blowflies and Adriana seed and caruncles. Blowflies resembled Adriana caruncles in having relatively low concentrations (10%) of linoleic acid and intermediate concentrations (18%) of palmitic acid, in contrast to Adriana seeds which have relatively high concentrations (62%) of linoleic acid and relatively low concentrations (5%) of palmitic acid.
The caruncle:seed mass ratio has been shown to be an important cue eliciting diaspore removal in other studies. Hence they were analysed in populations of Adriana quadripartite. Analysis of diaspore and caruncle weights revealed that while there is significant variation in seed weight, the relationship between seed weight and caruncle weight does not vary among populations, and hence the caruncle:seed mass ratio does not vary significantly among the sampled populations.