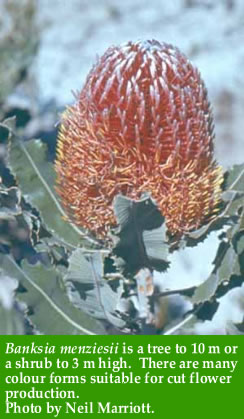 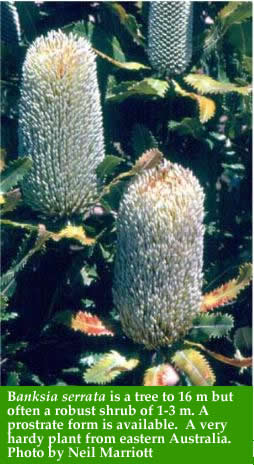 Early Lignotuber Formation in Banksia:
Investigations into the Anatomy of the Cotyledonary Node of Two Banksia (Proteaceae) Species

Anatomical descriptions are made of the cotyledonary node region of seedlings of B. menziesii R. Brown (1830) and B. serrata Linnaeus f. (1782), including information on node anatomy, bud type, location and number. Seedlings were sampled at 8, 15 and 26 weeks after seed sowing and observations made of serial transverse sections through the node region. In B. menziesii, fused auricles in combination with bases of the cotyledons form a thick sheath of parenchy-matous tissue surrounding the base of the seedling stem. Three types of buds are present: (1) an exogenous axillary bud in the axil of each cotyledon and leaf; (2) endogenous accessory buds in the cortical tissue at the base of each cotyledonary axillary bud; and (3) exogenous adventitious buds generated serially along the line of fusion of opposing auricles which occur either side of the stem. Additional adventitious buds occur singly on the adaxial wall of the sheath. At 26 weeks, phenolic compounds such as tannins accumulate in the sheath, which later develops into a lignified protective encasement in B. menziesii. Early cotyledonary node anatomy of B. serrata differs from that of B. menziesii, the fusion line of the auricles curving away and downwards from the stem base, thus precluding the formation of a sheath. Also, accessory buds are absent from the basal tissue of the cotyledonary axillary buds.Only two types of buds are present: (1) an exogenous axillary bud in the cotyledon and leaf axils and (2) exogenous adventitious buds generated along the line of fusion of opposing pairs of auricles, as well as from tissues next to each cotyledonary axillary bud. Knowledge of the number, types and location of buds present in the cotyledonary node will establish a base for further comparative anatomical studies and research on clonal cultivar development of Banksia