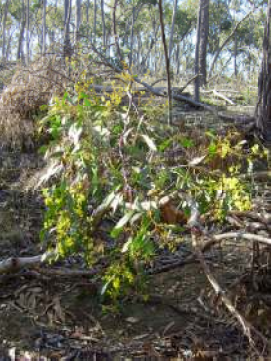 Soft-seeded species all displayed in situ longevity patterns typical of species with a transient soil seedbank. For all three species in situ seed loss was greatest after 12 months, however the source of seed loss varied. Seed was lost to decay for the two native species, while for the sole exotic species most seed was lost to germination. Briza maxima was also the only species for which seed was recovered after three years of in situ burial, albeit a very small fraction of the original amount buried (2.5%). Under ex situ storage the proportion of viable seed declined little over three years for three species examined (between 1.7% and 2.5%). For the two native species this suggests their soil seedbanks have the potential to contribute to regeneration beyond a year, however in situ conditions affecting seed decay prevent seed remaining in the soil seedbank for greater than a year.

For all hard-seeded species seed was recovered after three years of in situ burial, but the proportion of seed varied between species. The majority of seed from Acacia ausfeldii, A. genistifolia and Pultenaea prostrata was recovered after three years and viability differed little to that prior to burial. However, for A. pycnantha and A. williamsonii considerable seed was lost in situ, mostly due to germination.

Levels of dormancy also varied among hard-seeded species. Dormancy levels were initially high for all species prior to burial (c.98-100%), however proportions of dormant seed declined considerably for A. pycnantha and A. williamsonii (61.6±.9.1% and 50.4±.7.4% non-dormant seed respectively after three years of burial). Proportions of dormant seed also declined for A. ausfeldii and A. genistifolia, but not to the same degree (4.5±.1.3% and 15±.3.3% non-dormant seed after three years respectively). As heat associated with fire is a dormancy breaking cue in these species (Brown et al. 2000). This has consequences for species persistence considering that current fuel loads and accumulation rates in Box- Ironbark forest suggest infrequent fire events.