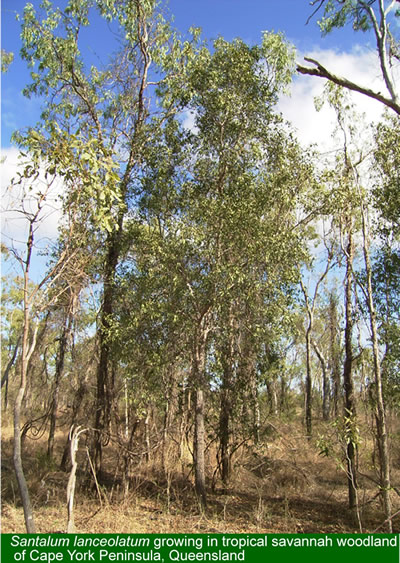 In Queensland, sandalwood (S. lanceolatum) has long been commercially exploited for its powdered heartwood used in funeral pyres and insence. Harvesting natural sources of sandalwood in Cape York commenced after 1900 and continued until the early 1930’s, stimulated mainly by demand from China. With recent identification of high quality S. lanceolatum in Cape York (Page et al. 2007) there is opportunity to develop this resource for commercial agroforestry plantings. This will depend on the development of forms suited to commercial production, with high growth rates yielding high volumes of heartwood containing concentrated oils with high levels of a- and ß-santalol.

The implementation of a successful breeding programme for any sandalwood species will depend upon knowledge of its breeding system and its crosscompatibility with related species that are a source for potentially useful characters. Given also the continued exploitation of S. lanceolatum in Queensland, a knowledge of its breeding system will assist those developing strategies aimed at conserving current wild populations and establishing new plantings within its natural distribution. Information on the breeding system and patterns of gene flow are important for planning germplasm collection, designing and managing seed orchards and for maintaining genetic diversity in breeding populations The objectives of the present study were to determine levels of (i) self- and (ii) cross-compatibility within Santalum lanceolatum, S. album and S. austrocaledonicum and (iii) cross-compatibility between these three sandalwood species.

Santalum lanceolatum may be considered to have a facultative allogamous (incomplete outbreeding) breeding system. This study found variation between genotypes in the level putative self-incompatibility, where some (20%) were found to set seed following self-pollination, while the remaining 80% had no seed development with such pollinations. However, a significantly greater proportion of genotypes developed seed following intraspecific cross pollination (62%) compared with selfpollination (20%). In accession 2 where sufficient self and cross pollinations were performed no significant difference were found between them percentage seed set. The seed set from self-pollination were successfully germinated and have been growing for 2 years without any substantial morphological distinction between inbred and outcrossed seedlings.

While total geographic isolation and significant morphological divergence exists between S. lanceolatum with each of S. album and S. austrocaledonicum this study found no indication of reproductive barrier(s) between them. No significant differences were found in the percentage seed set among S. lanceolatum intraspecific crosses (7.5%) compared with reciprocal S. lanceolatum x S. austrocaledonicum interspecific crosses (7.6%). Germination of seed derived from intraspecific outcross pollinations was found to be low (41%) relative to interspecific pollinations with each of S. album (114% – with many seeds producing two seedlings) and S. austrocaledonicum (70%). Therefore while seed set from intraspecific outcross pollinations was greater than for reciprocal S. lanceolatum x S. album crosses (4.3%), no significant differences were found for the percentage of seedlings developed from these two pollination types (2.5% and 4.8% respectively).

The results of this study have implications for both the domestication of S. lanceolatum for its commercial production and for conservation of its natural stands. The use of genetic variation present within the high quality S. album and S. austrocaledonicum could be used for the improvement of S. lanceolatum and vice versa. However, inappropriate planting of foreign each of these species within the their natural ranges is likely to result in gene exchange among them and affect the genetic integrity of these natural populations.