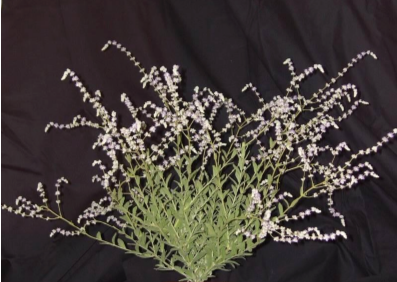 Newcastelia interrupta is an herbaceous perennial plant that produces attractive flowering stems well-suited to ornamental horticulture. Initial attempts to cultivate the species have revealed that it is susceptible to the fungal root pathogen Phytophthora cinnamomi. Several N. interrupta genotypes were collected from a natural population in southern Queensland and subjected to trials aimed at improving resistance to P. cinnamomi infection. One approach was to graft N. interrupta onto rootstock of coastal rosemary (Westringia fruticosa), a related species known to be Phytophthora resistant. It was demonstrated that grafted plants could be produced, however the grafting success rate was extremely low for both side (10%) and wedge (1%) grafted plants after 28 weeks. A second approach was to determine whether N. interrupta is capable of forming mycorrhizal associations (mutually beneficial relationships with certain species of soil fungi) and, if so, whether these associations could be used to protect the plant against P. cinnamomi infection. N. interrupta root samples from the natural population exhibited two types of mycorrhizal associations, arbuscular mycorrhizae and ectomycorrhizae. A subsequent pot trial found that a commercial inoculant containing both arbuscular mycorrhizal fungi and ectomycorrhizal fungi produced plants with a higher shoot biomass than non-mycorrhizal plants. However, mycorrhizal plants showed no difference in growth or survival compared with nonmycorrhizal plants when challenged by inoculation with P. cinnamomi. Genotype was shown to have an effect on the survival of plants inoculated with P. cinnamomi, with one genotype exhibiting a survival rate of 95% compared with <62% for all other genotypes. Therefore, improving Phytophthora resistance in N. interrupta might be achieved through selection of genotypes that exhibit natural resistance towards the fungal pathogen.