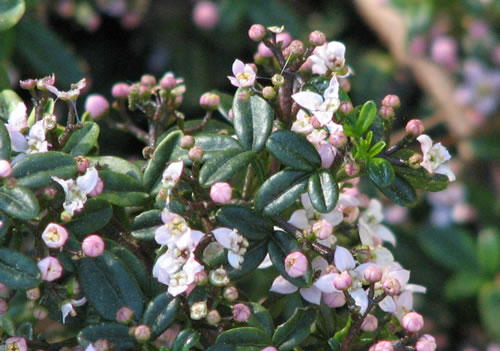 Zieria prostrata is an endangered species of the ROTAP category 2E, restricted to three headlands in the vicinity of Coffs Harbour. It has horticultural potential because of the beautiful flowers and prostrate habit and is relatively easy to propagate from stem cuttings. Griffith (1991) studied the distribution of the species, assessed its conservation status and suggested recovery objectives. Virtually nothing is known of the reproductive biology of the species which may help in effective management aimed at conserving the species in the wild. This study was undertaken at the request of National Parks and Wildlife Service of New South Wales with the financial assistance from the Australian Flora Foundation.

Zieria prostrata has tetrasporangiate anthers with a five layered wall, the innermost layer being the secretory tapetum with binucleate cells. The processes of microsporogenesis and microgametogenesis are normal with no evidence of either meiotic abnormalities or pollen sterility. The mature pollen grains are two celled and tricolpate. There are four ovules in each ovary. They are anacampylotropous, bitegmic and crassinucellar. There may be several archesporial cells but usually one grows into a megaspore mother cell. Meiosis is normal and gives rise to a tetrad of megaspores. The development of the female gametophyte follows the monosporic Polygonum type. The endosperm is of the Nuclear type. The embryo development appears to be of the Onagrad type. Although all the ovules appear to form seeds, nearly half become infected with insect larvae which eat through the endosperm and embryo. The seeds are exotestal, monoembryonate and ex arillate. Seed germination under laboratory conditions is extremely low. This cannot be explained in terms of seed coat anatomy. The fruit wall shows sub epidermal oil glands.