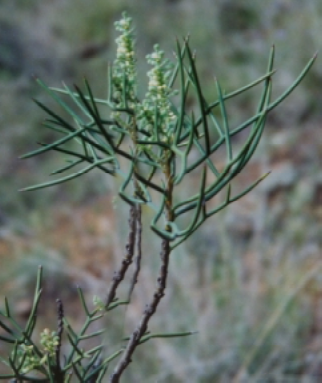 This study confirmed sterility and identified the causal factors associated with sterility in H. pulvinifera. Early tapetal degeneration resulting in incomplete pollen formation and very low anther dehiscence prevents fertilisation of viable ovules. In addition, extremely low pollinator visitation resulting from poor floral resources limits the potential for pollen transfer, despite low pollen viability. The confirmation that the only known population of H. pulvinifera is composed a single plant has implications for its endangered status and management; H. pulvinifera may be one of the rarest species in the world. It is likely that the species is a sterile hybrid, whose progenitors are either extinct or now geographically distant due to extensive destruction of the intervening habitat between H. pulvinifera and other ‘corkwood’ species. Information compiled on comparison species, H. ednieana, provides knowledge of the previously little studied Lorea group of Hakeas.

This report has condensed the outcomes of a PhD thesis funded by an Australian Postgraduate Award. Operating funds were contributed by the Australian Flora Foundation and the industry partner, NSW National Parks and Wildlife Service. Further information will be available in the completed PhD thesis, due for submission in July 2004 (Smith, in preparation).