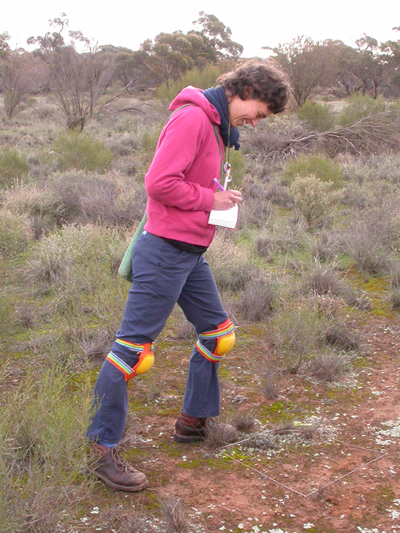 School of Botany, University of Melbourne

Biological soil crusts (BSCs) are the community of lichens, bryophytes, cyanobacteria and algae that commonly exist on the top few millimetres of soil in arid and semi-arid ecosystems. Total BSC cover is used as an indicator of ecosystem condition, due to the sensitivity of BSCs to livestock trampling and their functional importance in ecological processes such as soil stability and vascular plant recruitment. Despite recognition that BSC composition mediates BSC function, species are rarely included in site assessments, due to the challenge of confidently identifying these cryptic organisms. In response to this issue, David Eldridge and Roger Rosentretter devised a simple classification of species into morphological  groups for use in rapid assessments of BSCs. The degree to which morphologicalgroup responses reflect species responses is untested and the utility of morphological groups for the assessment of site condition is largely unknown.   We used Multivariate Regression Trees (MRT) to analyse two independent datasets from north western Victoria, to evaluate the utility of morphological groups as indicators of site condition* compared to species composition and total BSC cover.

Our study shows BSC species within morphological groups respond more similarly to ecological degradation than species across groups. Our results provide  support for using morphological groups in rapid assessments of ecosystem condition, because they allow us to generalise about species responses to degradation, are easier to assess in the field than species and are more informative about ecosystem function than total BSC cover.

*Because BSCs are important for a range of ecological functions they are relevant to a range of specific definitions of ecological condition (e.g. capacity of a site to retain soil and nutrients rather than lose them through wind and water erosion).