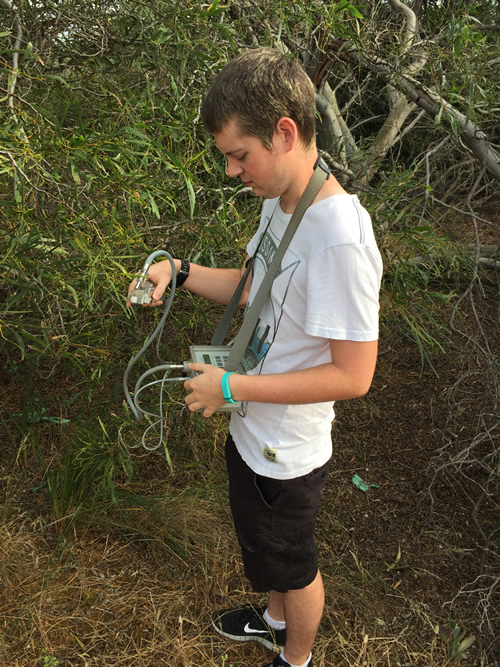 Received the Australian Flora Foundation Young Scientist Award for his poster at ESA 2014, the Ecological Society of Australia, held at the Alice Springs Convrntion Centre, 28th September to from 3rd October 2014.:

Mistletoe are abundant and diverse in Australia and affect community and ecosystem processes. They get their water and nutrients from another plant, but are able to photosynthesise. They obtain their water and nutrients by attaching to the host vascular system and creating a water potential gradient that allows sap flow from the host. This water potential gradient is maintained by leaving their stomata open and accumulating solutes within their cell vacuoles. Some mistletoes can parasitise both non-parasitic and parasitic hosts. Little is known about why this strategy exists. I aimed to determine whether it is advantageous to be epiparasitic compared with parasitic in regards to mineral nutrition, water relations and photosynthesis. The water potential, foliar nitrogen concentration, photosynthetic electron transport rate and photosynthetic efficiency were measured for Lysiana exocarpi growing on non-parasitic, root parasitic and aerial parasitic hosts at a high and a low rainfall site. Water potential of L. exocarpi was lower when epiparasitic, especially at midday. Foliar nitrogen concentration of L. exocarpi was similar on all hosts but was highest on the non-parasitic host. Electron transport rate and photosynthetic efficiency of L. exocarpi was similar on all hosts. Water potentials and predawn photosynthetic efficiency was lower at the low rainfall site indicating that L. exocarpi was more stressed. This could be because it is harder to maintain a water potential gradient. There seems to be no major advantage or disadvantage to being an epiparasite, and occurrence on parasitic hosts may be due to bird dispersal.

Author: Mitchell is in his second year of his PhD in the School of Earth and Environmental Sciences at the University of Adelaide. Research interests include plant ecophysiology particularly of parasitic plants and climate change.